Feel Good Contacts and Anti-Counterfeiting Group join forces to highlight the dangers of counterfeit sunglasses as 146,000 fake sunglasses are seized by customs 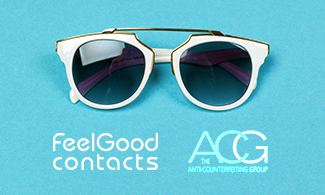 In the lead up to International Sunglasses Day (27th June 2019), Feel Good Contacts has partnered with The Anti-Counterfeiting Group (ACG) to warn the public of the dangers of purchasing counterfeit sunglasses.

The most recent EU Customs report revealed that 41 million counterfeit articles had been seized with a total value of 673 million euros. 34% of these items were recorded as being potentially dangerous to consumers. The authorities stated that over 146 thousand pairs of counterfeit sunglasses were seized.

Fake sunglasses are being sold at traditional UK market stalls and across the internet. Operating behind sophisticated looking sales sites and social media, criminals use fake trademarks, brands, emblems and bogus certification labels to entice customers into thinking they are buying genuine, safe products that often turn out to be nothing more than shoddy and dangerous tat.

Fake sunglasses pose a very immediate danger. While quality, branded sunglasses meet strict safety standards, fakes don’t and fail to block UV light from reaching our eyes. In fact, they can actually allow more UV light into the back of the eyes and as a result, fake sunglasses can cause more damage to the eyes than not wearing any sunglasses at all.

Nimesh Shah, Marketing Director at Feel Good Contacts, the UK’s leading online suppliers of eye care products commented: “Tempting as it might be to grab a pair of fake bargain sunglasses, many unsuspecting shoppers do not realise that they are purchasing glasses that offer little or no protection to dangerous UV rays.”

He added: “It is estimated that over three million people go blind each year from cataracts caused or enhanced by exposure to the sun. But there are other serious conditions which can be caused by direct and prolonged exposure to the sun such as macular degeneration, pterygium and photokeratitis. Our eyes are one of the most delicate organs in our bodies and yet many of us take them for granted. We don’t think twice about protecting ourselves with sun cream so we need to do the same with our eyes by wearing good quality sunglasses from a reputable stockist.”

Amounts of potentially damaging solar UV are greatest at around mid-day in summer. They increase as we move towards the equator. Sand reflects UV so will expose the eyes to further damage. As a result, eye protection is vital. Good quality sunglasses bought legally provide protection from UV light. In fact, sunglasses sold in the UK meet rigorous safety standards. Fake sunglasses do not meet these standards and therefore do not necessarily block the dangerous UV light from reaching our eyes.

Nimesh Shah concluded “We are urging sun seekers to buy their sunglasses from a reputable dealer as this is the only guarantee that they will get the sun protection that they need. Consumers need to check that their glasses meet the British Standard for sunglasses (BS EN 1836:2005). Also, look out for the CE mark (this indicates that manufacturing processes comply with the European quality standards) printed on the sunglasses which all sunglasses sold legally in the UK will have. Fakes have missing or wrong information so look on the inside of the arms. Is the brand name there, the model number and colour code? If so it shouldn’t scratch off easily, a common trait of counterfeit glasses. Sometimes it’s not easy to spot a replica, in this case what will be distinguishable is the price. If it’s too good to be true then don’t buy it.”

Phil Lewis, Director General of The Anti-Counterfeiting Group says that “Buying a pair of fake sunglasses on a whim has much wider implications than many imagine. 83% of all fakes come from South East Asia and are the result of workers, including children, held in some of the world’s worst sweatshop factories. In buying this increasingly dangerous junk, you’re not only helping to bring international criminality closer to our families but you are likely to be feeding the exploitation of some of the world’s most vulnerable people.”

He added: “The effect is also continuing to grow at home. According to the UK Government, the overall UK market in fake goods is worth £9.3 billion; which is 4% of all UK imports. Moreover, the Government has estimated it loses £1.3 billion in unpaid tax from the sale of counterfeit goods and that this figure is growing. With this come inevitable job losses and the threat of more and more criminals entering our lives. For these reasons, we are urging the public to report any instances of fraud.”

UV radiation is a central element of solar radiation. There are three types of UV rays: UVA, UVB and UVC.

‬‬‬‬‬UVC rays are the most damaging but are absorbed by the earth’s atmosphere before they reach us and are not a direct threat, whilst UVA and UVB rays can have serious long- and short-term effects on the eyes and our vision.

The leading cause of age-related blindness, macular degeneration is the direct result of prolonged damage to the retina. While the condition affects your central vision and what you are able to see when you look straight ahead, it generally does not affect your peripheral vision and does not lead to complete blindness. Sight loss is mostly gradual, but in some instances, can happen more rapidly.

Cataracts are a progressive clouding of the eye’s natural lens and core focusing mechanism. UVB rays in particular increase your risk of developing certain types of cataracts, although these can be treated with surgery.

Often called surfer’s eye, pterygium (tuh-RIJ-ee-uhm) is a non-cancerous, often fleshy coloured growth that forms on the layer of conjunctiva, over the white area (sclera) of your eye and can invade the cornea. As UV light is believed to be a main factor in the formation of these growths, it is commonly linked to surfers who spend long periods in the sun and are subjected to both direct and reflected UV rays. That does not mean, however, that non-surfers will not stand a chance of developing pterygium.

Also known as corneal sunburn or snow blindness, photokeratitis is the result of high short-term exposure to UVB rays.

The Anti-Counterfeiting Group (ACG) represents the voice of business in shaping an effective deterrent to counterfeiting in the UK. We help to steer effective policy, promote evidenced based actions, empower multi-agency partnerships and strengthen international collaboration. We have been working since 1980 to raise awareness of this serious organised crime.

Established in 2008 by qualified optometrists, UK based, Feel Good Contacts (‪feelgoodcontacts.com) is one of the UK’s leading online suppliers of discounted contact lenses and eye care products. It is also the only UK company to offer this discounted service via a mobile app. The matrix below shows the price per contact lens box charged by Feel Good Contacts compared to high street opticians.‬