Ever wondered how many hours it would take or how many hours you have already spent binge-watching your favourite show? Look no further than this Binge Clock, which lets you know just how many hours you could spend staring at a screen while enjoying the most popular entertainment currently available.

The American Ophthalmological Society recommends that you should give your eyes a break every 20 minutes. A proper break involves looking at an object 20 feet away for 20 seconds (the 20:20:20 rule). Now, while there are many shows with an average episode runtime of around 20 minutes, there are plenty with well over that. We all know when we are binging our comfort shows, our eyes can end up without a break for hours on end. Spending excess hours staring at a screen can lead to eye strain. The blue light from screens often means you will blink less, and the movement on the screen simultaneously makes your eyes work harder to focus. To make things worse, many of us do not position the screen at an ideal distance or angle (think watching from a laptop while nestled in bed), which causes further strain on your eyes.

Significant and repeated eye strain can add up over time and often lead to lasting effects on your vision. Unfortunately, this is especially true in children who spend more and more time glued to their screens nowadays. Regular eye examinations are essential for clear,comfortable vision. Glasses or contacts may help you feel more comfortable in your day-to-day life if you suffer from eye strain.

So, just how much time could you spend screen-starring while binging some of the greatest shows of all time? We investigated the total screen time for your favourite shows on Binge Clock, using IMDb’s list of top-rated shows. Since we all know having to wait months, and in some cases years, for the next episode of the show you just binged, this list only includes the top shows that have finished airing, so you can binge the complete story. 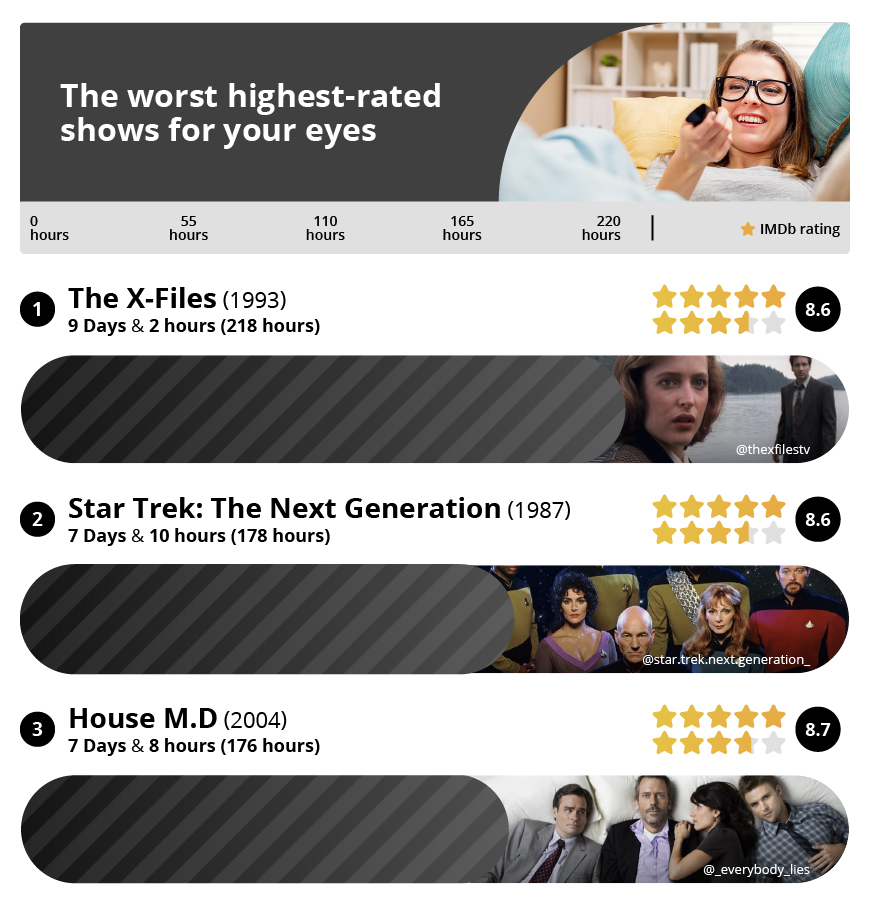 The worst highest-rated shows for your eyes

With a crazy total of 218 hours, the X-Files is by far the worst show for your eyes. With 11 seasons and 217 episodes, it would take you 9 days and 2 hours to watch it from start to finish, and that's without any breaks (not even for sleep). The show follows two F.B.I. Agents Fox Mulder and Dana Scully, as they investigate the strange, unexplained, and unsolved cases of the X-Files: cases which involve paranormal phenomena.

The runner-up for the longest show on this list is Star Trek: The Next Generation, with 7 seasons and176 episodes making up a galactic total of 178 hours of screen time. Released in 1987, the U.S.S. Enterprise-D sets off on a mission to go where no one has gone before. The show revolves around a new generation of Starfleet officers exploring the Milky Way galaxy.

House M.D. follows the sharp wits and genius of an antisocial doctor who specialises in diagnostic medicine. Despite dependence on pain medication, Dr Gregory House leads a team of diagnosticians at the Princeton–Plainsboro Teaching Hospital and does whatever it takes to solve the most puzzling cases. While gripping and addictive, binging the 176 episodes of House M.D. comes to 7 days and 8 hours of screen time.

The highest-rated shows you can watch in one weekend 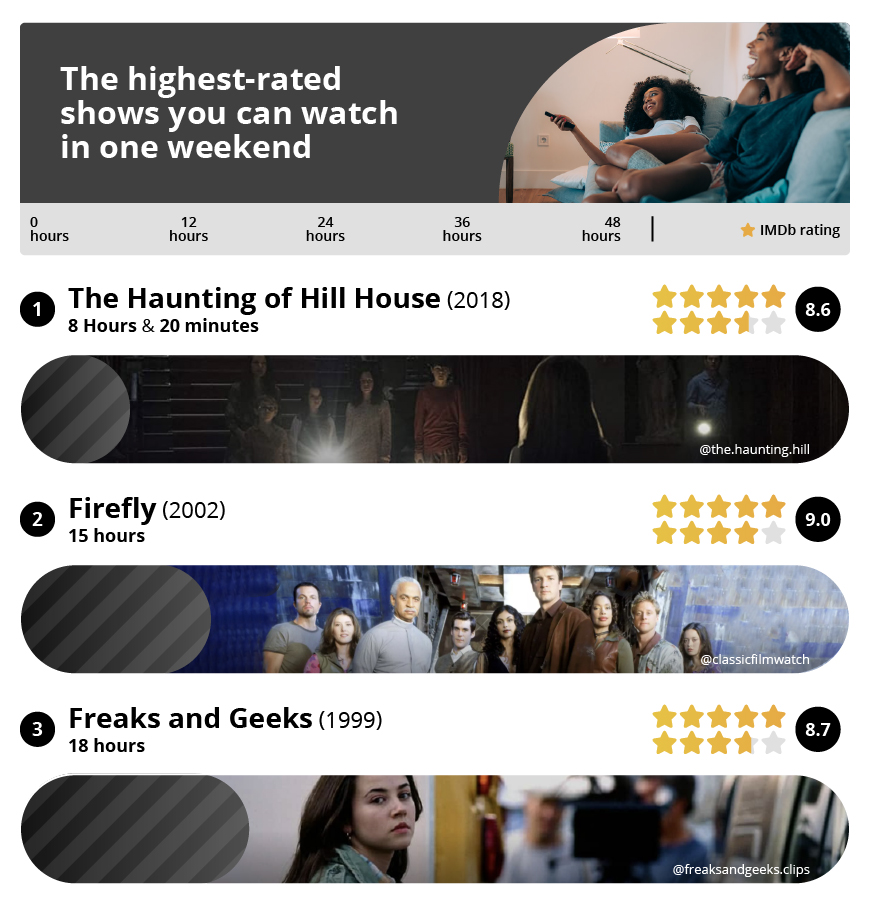 If you’re looking for a spooky show to watch this weekend, then The Haunting of Hill House is the perfect choice. At just 8 hours and 20 minutes, this miniseries has ten episodes that are sure to have you hiding under your blankets. The show centres around a group of siblings who are forced back together after years apart to confront the ghosts of their past, be it in their minds or in the shadows of Hill House.

Firefly is the “cancelled too soon” show on this list. Cancelled after its first season, Firefly produced huge sales when it was released on DVD and has had a strong fan following since. Coming in at exactly 15 hours, this is one you can finish in a couple of days as you explore a brand-new star system in the year 2517 alongside the renegade crew of the Serenity.

If you’re after more of a binge-watching challenge, then binging the whole 18 hours that make up the fantastic Freaks and Geeks is the one for you. Freaks and Geeks has long been recognised as a cult classic and portrays the “sad and hilarious unfairness of teen life”. The show follows a high school mathlete who begins spending too much time with a group of burnouts and her younger brother, who struggles to navigate his freshman year.

Why is binge-watching TV bad for my eyes?

The problem with binge-watching shows on your tv or device is that these screens give off blue light. Blue light is short-wavelength and high energy light, meaning it scatters more easily which means it is not as easily focused as other visible lights. Because it’s harder to focus on blue light, excess exposure to blue light can lead to eye strain. Symptoms of eye strain include sore and irritated eyes and further difficulty focusing. In severe cases, blue light can cause retina damage, leading to vision problems such as macular degeneration.

What can I do to protect my eyes and still enjoy my favourite shows?

If you start to feel eye strain from too much time spent on your screens, you might want to decrease your exposure to blue light. Here are a few ways to do that:

The obvious answer is to reduce your screen time. Take more time away from your screens or take frequent breaks to rest your eyes (remember the 20:20:20 rule).

There are such things as blue light filters, which are available for most smartphone and computer screens which decrease the amount of blue light given off by these devices.

Blue light is an issue, especially if you spend too much time looking at screens. This isn’t just watching your favourite show, but working at a computer screen, gaming, or scrolling endlessly on your phone are all activities which expose your eyes to blue light and can lead to eye strain. While you don’t need to give up your binge-watching habits, it might be beneficial to consider some of the recommendations above on how to reduce your exposure to blue light.

Using IMDB’s list of the top-rated TV shows, we recorded the number of episodes and the run time of each episode to calculate the total runtime of these 250 shows.